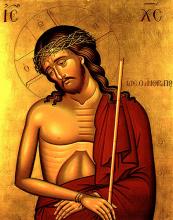 On the days following His entry to Jerusalem, Christ spoke to His disciples in particular about the signs that will precede the Last Day (Matt. 24 and 25); and so this forms the theme of the first part of Holy Week.  In Western worship, on the other hand, the 'last things' are commemorated mostly during the pre-Christmas season of Advent.  The eschatalogical challenge of the first thee days of Holy Week is summed up in the troparion and exapostalarion at Matins, both of which are repeated three times to a slow and solemn melody.  The troparion, 'Behold the Bridegroom comes at midnight...', is based on the parable of the Ten Virgins (Matt. 25:1-13); the exapostalarion, 'I see Thy bridal chamber...', on the parable of the man cast out from the feast because he had no wedding garment (Matt. 22:11-13).  Here, presented in especially urgent terms, is the call that we have heard on many occasions during Lent: the End is near at hand; be watchful; repent while there is still time.

Each of the three days has its own particular theme.  (Ed. note:  Matins is held the evening before, so the Matins for Great and Holy Monday are served on Sunday afternoon/evening, Matins for Tuesday are served Monday night, etc.)

- From The Lenten Triodion, "The Meaning of the Great Fast", Metropolitan Kallistos (Ware)