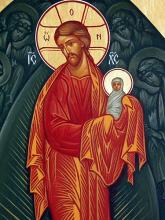 Standing at your deathbed, the Apostles cried aloud in wonder:

The Palace of the King withdraws: the Ark of holiness is raised on high.
Let the gates be opened wide that the Gate of God
may enter into abundant joy,
She who asks without ceasing for great mercy on the world.

Several years ago, I was sharing with an Orthodox pilgrim the thought that the Dormition fast, though short, was very intense spiritually and that hardships seemed to befall people more in those two weeks than in the long Apostles’ fast. Without hesitation he responded, “Of course! Lent is the hardest, but after Christ, who does the devil hate the most? The holy Mother of God!” And how true! Many years the Dormition fast catches us off guard. Our flesh groans, “But the Apostles’ fast just ended!” However, the Dormition fast is an extremely important fast. It is short but intense, therefore an excellent opportunity for spiritual exercise.

First and foremost, we keep the short but strict Dormition fast with care and attention because we love the Mother of God. She helps us, she loves us, she attends to our needs, and with the boldness of a mother, she intercedes with her Son on our behalf; not because He doesn’t already know our needs, but because that’s what a loving mother does! She is the foremost of the saints, the first Christian, the chosen one, the bush that burned but was not consumed, the ark, the tabernacle, the chalice, and the gateway to salvation. She loves us because we are her Son’s. She loves what He loves. By honoring her we honor Him, and because of Him we honor her.

Secondly, we keep the Dormition fast with diligence because Satan and his demons hate her whom we love. They would have her dishonored and, even better, forgotten, for the Incarnation of Christ through her is all mankind’s opportunity for salvation and deification—adoption by the Father into spiritual kinship with the Son. We take heed of this reality every year for, after the Resurrection, the powers of darkness despise the Dormition of Mary the most. She believed, she was saved, she suffered and was persecuted for the sake of her Son. His love for her would not endure that she should experience decay in the grave, so He took her bodily into heaven after her death.

During the Dormition fast each year, take time to reread the account of the Virgin Mary’s death and bodily assumption. It will touch your soul and energize you spiritually. And it is a great adventure! The Apostles find themselves caught up in clouds and whisked to Jerusalem from various continents where they are evangelizing. The Jewish leaders plot to kill the blessed Virgin, fearing that a following will arise after her death as it did for her Son. Lightning shoots from her house to defeat the Jewish attackers. After her death, one man has his hands cut off by the sword of an angel for attempting to overturn her bier while in procession. He repents, is healed by prayer, and joins the burial procession, glorifying the True God and bearing witness to the holiness of His Mother. The Apostle Thomas arrives late and sees the Theotokos ascending bodily into heaven. As a gift she throws Thomas her sash (which is preserved on Mt. Athos). The Apostles and disciples then reopen her tomb, and she is not there.

The month of August is materially and spiritually a time of transition. The end of summer is in sight, last-chance vacations are squeezed in, and plans are being made for the beginning of school. It is a time of liturgical transition as well, for the annual celebration of Christ’s salvific journey on earth is coming to a close. The incarnate Son of God was enclosed physically in the womb of Mary, the Theotokos; therefore, the liturgical celebration of His ministry on earth is also encapsulated within her life. We began the liturgical year with the feast of her birth and end it now with the feast of her repose.