Hasten to the tree of the Cross of Christ 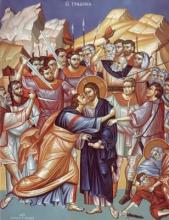 ~~
Today is the day of the Lord’s betrayal, a day dark and dolorous, which is why the Holy Church marks it on par with the day of the Lord’s death, with the seal of fasting throughout the whole year. He who loves his Savior will not break this seal, but will with all faithfulness maintain this sign of sorrow and mourning for His beloved. For, although the betrayal, as well as the death of the Lord, served as the consequences of the salvation of the whole world, all the same, this action was the darkest and most atrocious. I imagine it was even more criminal than the Crucifixion itself. For those who crucified the Lord did not know Him as they should have: For had they known it, they would not have crucified the Lord of glory (1 Cor. 2:8). And who betrayed Him? His own disciple, one of the twelve—that is, the closest. He was betrayed by one who heard every one of the Lord’s conversations, was witness to His life and miracles, shared with Him, and continued with Him for more than three years, in joy and sorrow.

After all this, the betrayal by the traitor is so unexpected that the Church itself in bewilderment will wonder tomorrow, “What caused you to betray the Savior, O Judas? Did He expel you from the ranks of the apostles? Did He take from you the gift of healing? Did He send you from the table while taking supper with the others? Did He wash their feet and pass you by? How have you forgotten such good things? Your ingratitude is notorious, But His boundless long-suffering and great mercy are proclaimed to all!” (Matins of Holy Friday, Sedalen Tone 7).

Everything was done for Judas, and everything was despised by him! That he had no reason to lament and complain about his Teacher is demonstrated by his own words and terrible end: I have sinned, he said to the very men who would kill the Master, in that I have betrayed the innocent blood (Mt. 27:4).

What led you, you wretch, to this terrible sin? Avarice and the devil, say the Evangelists. Carrying the money chest, the Iscariot was addicted to what he was carrying, and turned out to be a thief. After that, the holy community of Jesus, which was dominated by a voluntary spirit of poverty and selflessness, became alien for him, heavy, repugnant to his soul, and infected with passion. Judas everywhere and in all things dreamed of lucre and silver pieces. The devil did not hesitate to take advantage of this miserably-disposed heart, and, establishing his dwelling in Judas’ soul, forced him to look at everything happening not with the eyes of faith and love, as the other apostles did, but with the self-serving eyes of publicans and Pharisees. That is how Judas looked upon the myrrh which Mary poured out upon the feet of Jesus, and, pretending to be a friend to paupers, he complained that it was not sold, and the money was not given to the disposal of his wickedness. Undoubtedly, Judas looked upon everything else this way too. “Why,” he thought, “do we walk from one corner of Judea to another like beggars? Why not take advantage of the people’s zeal, and take power into our hands, which belongs to Him anyway? After all, the Messiah should, in the end, reign over everyone and everything. Do we really have to wait for them to capture and execute us all? It will surely happen. Let others wait for that. The Iscariot is not so simple and near-sighted. He’ll get his before that.” “What are you waiting for?” the devil whispered in his ears.

Now the most favorable thing is for him to lag behind Jesus’ community. You see how the Sanhedrin seeks a chance to secretly take the Teacher. You can even do this subtly so the Master doesn’t consider you a traitor. For, what does it require? Just show where the Teacher stays at night. Moreover, they’ll pay you for this important service, and through this you’ll become connected with the top officials of the Sanhedrin. And it won’t be a big problem for Him: You yourself have seen how He more than once miraculously saved Himself from all the machinations and webs of His enemies; and He’ll save Himself now, and you will do your deed and make yourself happy. Take the opportunity, and hurry!

This miserable disciple truly hurries—to his death. Under the pretext of shopping for the feast, he finds occasion to secretly visit the high priests and arranges the betrayal with them. The desire not to present himself a lowly merchant, trading for blood, and to demonstrate an imaginary zeal for the good of the Sanhedrin, forces him to agree to the most insignificant price, in the hope of, in time, bigger and better rewards. For this he appeared even in the Garden of Gethsemane, with the appearance not of a traitor, but of a man returning from an errand, who therefore allowed himself to greet the Master as a friend, and even to kiss Him—although this kiss was itself a sign for those Jewish soldiers appearing then as if without any agreement with Judas. That is why none of the disciples could tell until the very end who the traitor was.

The Master alone saw and knew everything; He saw and spared no expense to save, not Himself, but this poor disciple. So much poignant teaching at the last supper! The washing of the feet, and the giving of the Body and Blood could touch the spirit of the reprobate, but it didn’t touch Judas! The passion of avarice suppressed all else!

But it was suppressed only temporarily. When the plan was accomplished, when the Master, instead of miraculously saving Himself from His enemies, gave Himself over to them as a lamb to the slaughter, Judas awoke and remembered all the good, holy, and Divine He saw in Jesus, and turned to remorse. The pieces of silver were thrown down, the Master’s innocence was publicly confessed; it remained only to, like Peter, cleanse his sin by tears and turn to the Lord and Master with faith. But the devil inspired something else: First he seduces him with impassivity, then he taunts him with his unforgiven guilt and sin. And now Judas hangs dead on a tree! Then, and not before, these terrible words overtook him in all their strength: It had been good for that man if he had not been born (Mt. 26:24; Mk. 14:41).

You see to what end the passion of avarice led this man, who was not even the evilest! For, if Judas had not promised much good from himself, he would not have been chosen as an apostle.

Let us, brethren, keep watch over these ailments, just as other passions, for they are all equally dangerous, and sooner or later, they will end in man’s spiritual and bodily death. But, having fallen, do not despond, and do not despair! There are no incurable diseases for the Heavenly Doctor. As long as we live, we can be saved, no matter how great our sins. If Judas himself, instead of the deadly tree, had hastened to the tree of the Cross of Christ with faith and repentance, then he would have entered Paradise with the repentant thief, without any silver pieces. This is how all the Divinely-wise fathers of the Church speak and teach about it. Amen.